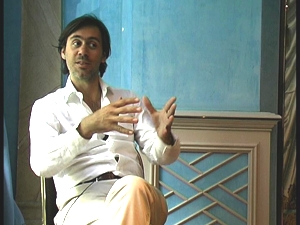 MC: What was your personal career in becoming a filmmaker?

EM: After graduation at school went to Paris. First I made a short film with a kind of subvention. And it was very bad. I couldn't manage actors and screenwriting. Then I worked as an assistant. After that I entered a dramatic school for learning how to play and maybe how to direct actors for the future. And by myself learning scriptwriting because I heart that only Americans know how to tell stories so I tried to read all screenwriting books from the USA. After that I entered to La Femis, the National Filmschool and my ending film called in French "Promène-toi donc tout nu " was released after quitting school. It was a fifteen minutes short film. Different producers proposed to me to make a feature length film. So one year after quitting school I made my first film "Laissons Lucie faire". And then I made the two other films "Venus and Fleur" and "Change of Adress", which made the Directors' Fortnight at Cannes and my last film "Un Baiser s'il vous plait", which was premiered at the Venice Film Festival..

MC: When did you come up with the idea to make your movie "Un Baiser s'il vous plaît"?

EM: I think just before shooting "Change of Adresse". Usually I've got an idea for quite a long time and I work a lot on the screenplay structure. And when I have all the structure, I write very quickly. One week, one month is enough after preparing the film. But it's always difficult to say how much time I actually needed to write the film. The writing time might be a week but you cannot count the time before because you work and do other things at the same time.

MC: Which role does the kiss play in your movie?

EM: I think the desire of kiss plays a role. The kiss is the goal. The dramatic moment, is the time between the burst of the desire and the kiss. And the kiss is the end not completely because there are other goals. The idea in the film, even if there are other kisses during the film but the mainline is all the way the character take to another kiss.

MC: Why did split up your movie in an interior and an outer story and didn't you just tell the story of Julie and Nicholas?

EM: The first idea of the films was the last scene. And I like to see the influence of any story on other stories. I think when we tried to determine ourselves for choice different stories on earth play a role in our choice. I wanted to show that in the film and I found it very lyric ? to go into a story and to go into another story and so on. And I wanted to show the paradox things that the character to explain why she can't kiss him but during the story of the film they are getting closer and closer and closer. Change the aim of what she is doing

MC: How difficult is it to direct and act at the same time?

EM: It's not very difficult. A lot of directors do that. It's not very difficult because I chose my crew and it's a good crew and I can believe in them. It's easier when your are on of the actors. You play with them and fail with them and propose with them. It's simple. And as an actor for me I don't feel to have to be in the character. I know the story. I play to tell the story. It's more difficult when you start editing because you see your face. And I can't be charmed by my face. That's why I don't like to see my films again.

MC: While writing your script did you already know that you would take over the part of Nicolas?

EM: Yes, when I write, I see myself in each character, even female character.

MC: Did this knowledge influence the character while creating the person of Nicolas?

EM: No, when I write I don't think about other actors. When I am writing I project myself in each character. They are talking and thinking like I can. I remember that it was very difficult for me in earlier times to write screenplays because I asked myself, this character is a woman, and how can I let a woman speak or this character is an old man. And today I say, however. Anyway, all my characters will speak and think how I am. It was a big liberation. And then the work of each actor because when you actors screenplay you bring maybe 50 percent and the other 50 percent of the character is brought by the actor or by the actress. This is maybe an answer.

MC: Which role did sound play in your movie?

EM: It played a very big role as big as the visual image because cinema is image and sound. Sound is maybe sometimes even more than image because sound is the rhythm of the film, the air of the film. The more film I make, the sound is taking over more and more importance.

MC: Are there any advices that you can give to young directors?

EM: It's always difficult to give advices. I can just tell something out of my experience. I think the most frightening is when you start with film the pressure that you have to think about everything. You want to manage everything. You think great directors control everything. And that is wrong. Instead of trying to control things it is better to listen. The work of the directors is to choose from the different propositions you have. Actors make propositions, the photography director makes propositions and all people make propositions if you want to listen to them. And you never know what you want but you know what you don't want. The best advice is to listen and not to try to control.

MC: Thank you very much.