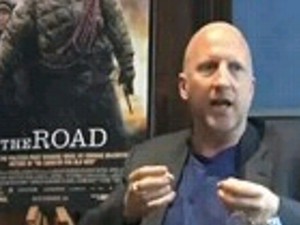 How do you create a convincing post apocalyptic world with sound effects and is there anything in general you set value on concerning sound design and film score?

Well, I mean it actually all sprung from the book. We want to have this idea - that is in the book - of the sound of trees collapsing and also the silence of things that we are so used to, like the sound, when you walk outside. But there is no electricity anymore, everything is broken down and there are no birds etc.

So it was getting rid of birds and creating a silence! And the score, the actual music score as well, was more about two elements. One was more generic, highlighting fear and tension, inspired from films like “Texas Chainsaw Massacre”, so just a kind of very primeval, scary sort of sound. But the other was something that was meant to be more what the father has to carry in his head, which is the loss of things and beauty. That’s a much more lyrical, soft, tender side!

In your movie “The Road”, it’s noticeable that there are few dialogues. What impact does that have on your way of storytelling?

The writer has this great thing of ‘less is more’, where everything is just stilled down. So the few words, that they have to say, are loaded with significance. The dialogue is actually 90 percent from the book and yet, it’s just enough to help to tell that story, I think…I hope! But distillation, you know, stilling it down, so that every word counts.

How do you usually respond to the individual needs of your actors (some actors need more, some less directing) and how did you direct your protagonists in “The Road”?

Well, I think rehearsals are really important! Not to workshop the actual material, but just to get to know people, what the actors needs are - and that’s a discovery of getting to know each actor. I know there are general schools of acting, but it seems like there are as many approaches to acting, as there are human personalities. In other words: Every single approach is slightly different! So, some people like to be more method and go up and down into their own sort of internal world. Others want more to ask lots of questions and have constant feedback. And you get to know those needs as you go along very quickly. It’s an amazing process, very interesting.

When you are working in the real locations, in real environment, it becomes another character. It’s like the actors are always reacting or working of something. That was really the case with Kodi, Viggo and the landscapes, because I noticed that their performances were changing. The more they got caught up in that environment, they were working of it. So it was really another character. It kind of intensified their relationship and that was an amazing thing to see!

What is essential to keep in mind, if you take such a young protagonist like Kodi Smit-McPhee into a scary post apocalyptic world? Was it frightening or just fun for him?

Well, that was my biggest worry out of embarking on anything to do with this! I got the book before it was published. I knew it was a special book, so I knew I’d be under fire for that - how it was going to be adapted. But to me, the overwhelming fear was the boy. The key was to find a boy that was emotionally mature enough to handle all of that. And I started from a place, thinking, I would have to get around it all the time.

A similar approach - I didn’t know this until recently – the boy in “The Shining” didn’t even know that it was a horror movie. And I have started my approach from the perspective of how to protect the child.

But Kodi’s sister is an actress, the father is an actor… He really is an amazing kid, but the most amazing thing about him was his emotional maturity. Before I even auditioned him, his father had read him the whole book and he understood it in a really sophisticated way. He was very grounded and a real kid and we were always encouraged, while we were filming. When there were breaks, we encouraged him to be a kid and Viggo would be teaching him the sort of moves that he learned on “The Lord of the Rings” trilogy. There was a lot of humour with the crew, but we all tried to protect Kodi from the material. But at the same time, he just totally understood it and had no problems with it. In fact, it ironically werethe adults that struggled much more with it. He really understood that drama is about conflict - this is a conflict that makes these characters do this etc.

What characterizes the scene for instance with Robert Duvall, was a scene with a dog, that was very old, arthritic and blind in one eye - this was a day before filming the Duvall scene - he came and suddenly realized that’s just like this old man that he wouldn’t really know how to relate and this guy would be like him relating to another animal or something.

So he was treating him like it was his precious little pet almost, hence the father saying “No, we can’t keep him”. So he was incredibly ensured and sophisticated, way beyond his years.

And even the Spanish DP master kept whispering that this boy is not of this world. And all the actors, for example Duvall, he just turned me on the first day and said: Where did you get the kid? So we were very fortunate. I was really lucky to get the material, but then, the second great gift was finding Kodi.